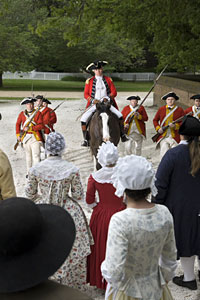 Benedict Arnold in a standoff with townspeople of Williamsburg during the two days that he and British forces held the town in 1781. 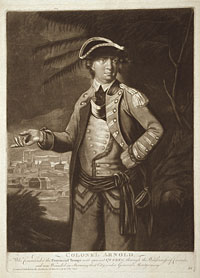 A print of Colonel Benedict Arnold, a hero wounded at the Battle of Quebec, seen in the background.

Arnold, now General Arnold in His Majesty’s army, confronts patriots of Williamsburg, who consider him a traitor to the cause of freedom.

Editor’s note:
With this item, the journal inaugurates a series of first-person question-and-answer interviews with historic figures interpreted in Colonial Williamsburg’s Historic Area.

Scott Green is Colonial Williamsburg’s official villain. During Revolutionary City programs, he portrays Benedict Arnold, the traitor. American guests often boo him; Britons sometimes cheer. Born in America, Arnold served bravely and well as a Continental general, but changed sides in 1780, finishing the war as an English general. In April 1781, Arnold came to Williamsburg. The journal talked with Green speaking as Arnold might. A condensed and edited version of the interview appears below.

General Arnold, why are you in Williamsburg?
I am here conducting a mission for the British army. My stay will be brief. I have been sent to this province to destroy military supplies and to prohibit colonial reinforcements from reaching American forces opposing Lord Cornwallis, who now is campaigning further south. I also am here to allay the fears of the populace. We want to assure them that the royal dominion of Virginia is secure for King George and those loyal to him.

Some townspeople call you a traitor. It doesn’t seem that you’ll find many supporters of the British crown here.
Rest assured, my good man, that there are Loyalists in Williamsburg. In fact, there are Loyalists throughout these provinces. I believe that most people on this side of the Atlantic still are faithful to king and crown. While my command is here, we will offer people the opportunity to sign loyalty oaths to King George III. Those who do so simply pledge that they will not take up arms against his majesty’s forces. These people will be free to continue their usual business. Others will lose their freedom.

Do you believe Britain will win the war?
I do. Nevertheless, there are men in Congress who will try to protract the conflict for self-serving reasons. I know, too, that General Washington is a resourceful commander. Still, with superior land forces and the support of the Royal Navy, a British victory is the only logical outcome.

Why did you betray the American cause?
I haven’t. I took up arms at the outset of this conflict to find redress to our grievances against Great Britain. Now, His Majesty’s representatives have agreed to address our concerns. The olive branch of reconciliation has been offered to us. What is being presented actually is well beyond reasonable expectations. A path now exists toward an honorable union. Unfortunately, self-serving men in Congress want to prolong this war. Because of these factors, I saw no choice but to take up the king’s arms and seek a speedy conclusion to the fighting.

Some say you changed sides for money. Certainly, you’ve asked Congress for funds, and you have a reputation for spending liberally. So, how great a role did financial needs play in your decision to join the English?
My decision was a principled one. It was not a matter of money. My requests for compensation to Congress merely reflected what I have lost, including my estate. I spent a handsome fortune while in the Continental service to feed and to supply my own troops when Congress would not provide for them. Again and again, Congress and the provincial governments denied my requests for compensation. I repeatedly encountered petty bureaucratic obstacles, like requests for receipts. It seems to me that it is difficult for a man to keep up with scraps of paper when his life is at hazard day after day on the field of battle. I also have suffered for the American cause. Let me remind you that I was wounded twice in the left leg while in the Continental service, and it is now two inches shorter than it was.

It is common knowledge that your wife’s family in Philadelphia and your wife have Loyalist sympathies. How much responsibility does your wife bear for your decision to leave the American army?
I am influenced by my wife as much as any man is influenced by his wife. That, sir, is all I have to say on the subject.

Many Americans hate you. How do you think General Washington would deal with you if you were captured?
I have been told on numerous occasions that, if taken, I would be summarily hanged. I know that General Washington has given orders to the Marquis de Lafayette to do just that should the opportunity arise. I have proven my tenacity on the field of battle, and I can state categorically that I will not under any circumstances be captured alive. If they find my corpse, they can do with it what they will.

Colonial Williamsburg's Lord Dunmore played by Dennis Watson, and Benedict Arnold played by Scott Green talk in the gardens of the Governor's Palace.