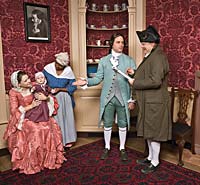 In the census of 1790, the first, assistant marshals in federal judicial districts gathered data from households on all that belonged to them—adult, child, slave, and freeborn. From left, Ellen Knecht, Eomer Knecht, Sylvia Lee, Ben Knecht, and Steve Holloway. 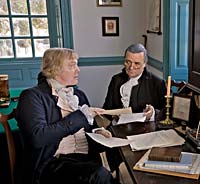 Tom Paine, here in an 1800s portrait by A. Easton, railed against the unequal representation of England’s electoral system. 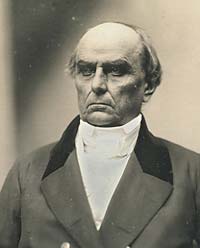 “The Greatest Practical Approach to Exactness.”

The Problem of Apportionment and Washington's First Veto


It sounds so simple. “Representatives . . . shall be apportioned among the several States which may be included within this Union, according to their respective Numbers.” So reads Article 1, Section 2, Clause 3, of the Constitution of the United States. Yet this apparently uncomplicated provision not only led to the nation’s first veto—it poses a problem that has exercised historians, political scientists, legal scholars, and mathematicians for more than two centuries.

The principle is straightforward: more residents should mean more representatives. Americans took pride in proportional representation, contrasting it with the “rotten boroughs” in England. Although members of Parliament had been allotted to the districts more or less according to their population, centuries of demographic change had been ignored, leading to absurdities. Once bustling districts, now deserted, retained their medieval numbers of MPs; burgeoning cities were stuck with the representation they had half a millennium before. As Tom Paine wrote in The Rights of Man, “Old Sarum, which contains not three houses, sends two members; and the town of Manchester, which contains upwards of sixty thousand souls, is not admitted to send any. Is there any principle in these things?” The framers of the American Constitution announced that seats in the House of Representatives would be based on population, which would be determined every ten years. Nothing, it seemed, could be simpler.

The constitution provides, “The actual Enumeration shall be made within three Years after the first Meeting of the Congress . . . in such Manner as they shall by Law direct,” and that “the Number of Representatives shall not exceed one for every thirty Thousand.” In 1791, after the census of 1790 put the national population at 3,929,214, Congress began drafting a bill to apportion the House. The first version— “An Act for an Apportionment of Representatives among the Several States According to the First Enumeration”—passed the Senate in February 1792 and the House in March. It was presented March 26 to President George Washington for his signature.

The president found the bill mathematically and politically troublesome. Early in April 1792, Washington shared his concerns with his inner circle—Secretary of the Treasury Alexander Hamilton, Secretary of War Henry Knox, Attorney General Edmund Randolph, and Secretary of State Thomas Jefferson—and asked for their opinions. Hamilton and Knox encouraged the president to sign, but Randolph and Jefferson counselled a veto.

I have maturely considered the Act . . . and I return it . . . with the following objections.

Second—The Constitution has also provided that the number of Representatives shall not exceed one for every thirty thousand; which restriction is, by the context, and by fair and obvious construction, to be applied to the separate and respective numbers of the States: and the bill has allotted to eight of the States, more than one for thirty thousand.

It was the first time a president rejected any law passed by Congress, and one of only two Washington vetoes—an indication of the seriousness with which he approached the subject.

Washington’s insistence on “one proportion or divisor” is a mathematical expression of the one person, one vote, principle: no one’s vote should count for more than anyone else’s. The Congress’s bill, Washington said, did not meet that standard. Georgia and Delaware, for instance, each had two representatives, but their populations differed. Georgia had one seat for every 35,418 residents, and Delaware one for every 27,770. A vote in Delaware was, in effect, worth almost 28 percent more than a vote in Georgia. The inequity bothered Washington, as did the fact that eight of the thirteen states violated a Constitutional mandate by having more than one representative for every thirty thousand residents.

A new version of the bill followed days after the veto, based largely on Jefferson’s calculations— Jefferson, like Benjamin Franklin, had a serious interest in mathematics, and was among the first to consider apportionment carefully. The new bill satisfied Washington and his cabinet, and was soon signed. But the question still hasn’t been settled to everyone’s satisfaction.

At first glance, a formula for apportionment seems simple and intuitive, the sort of thing that can be jotted on a scrap of paper in minutes. The size of the House’s membership is arbitrary; although it has been fixed at 435 since 1913, that provision was passed into law only in 1929 and can be changed by Congress at any time. But the number of seats can always be known in advance, and the population of each state will be known after each census. From these pieces of information it should be easy, even for the math phobic, to calculate each state’s apportionment.

Mathematicians distinguish the exact quota— the result of that division, which may contain fractions—from the quota, a whole number with no fractions. But what’s the fairest way to go from the fractional number to the whole number? We could round everything up: state A, since its exact quota of 2.99 is more than 2.0 but less than 3.0, would get three representatives; states B and C, since their exact quotas of 3.01 and 3.99 are more than 3.0 but less than 4.0, would get four each. Or we could round down, ignoring the remainders: this would give state A, with its exact quota of 2.99, two representatives; states B and C, with exact quotas more than 3.0 but less than 4.0, would get three each. This was the policy suggested by Jefferson in 1792—known to mathematicians as “the method of greatest divisors”—and was used in the United States through the 1830s.

But the census of 1830 produced the inevitable difficulty: Daniel Webster pointed out that the exact quotient for Massachusetts would be 12.99, and rounding it down to 12 seemed grossly unfair. To avoid this problem, he proposed rounding small fractions down and large fractions up: in our imaginary scenario, this method would give states A and B three representatives each, and state C four. But distinguishing “small fractions” from “large fractions” is not simple. Mathematicians can use such approaches as “the method of greater fractions,” “the method of geometric fractions,” or “the method of harmonic fractions,” but no two methods produce the same result. And whatever the results, some state is bound to feel cheated.

To make matters more baffling, when we complete the apportionment and total the representatives from each state, none of these methods is likely to yield a total of 435. Rounding errors, compounded across all the states, will probably skew the figure. Some proposed systems—including a so-called Vinton method, used, with variations, from 1850 to 1940—therefore assign representatives to states with remainders not on the basis of a simple rounding up or down, but by allotting the leftover seats round robin until the proper number is reached. The mathematician I. B. Cohen described a few methods for distributing the fractions fairly:

And so on. But it turns out that systems like these, though they seem fairer than picking an arbitrary policy for rounding up or down, can lead to the “Alabama paradox.” In 1881, as Congress debated the preferred size of the House, it was discovered that, in a House of 299 members, Alabama would have eight representatives; in a House of 300, they would have seven. In other words, a state’s delegation could shrink as the total number of representatives grew.

If discussions such as these seem abstruse—burdened as they are with details only a mathematician could care about—the real-world implications can be substantial. Much rides on the choice of mathematical models: a state has reason to care whether it has two, three, or four votes in the House. As the Yale Law Journal said, “The real controversy concerns selection of the method of apportionment closest to the standard, which the Constitution must have implied, of being fair to every state. To resolve that controversy, mathematics must come to the aid of law.”

It’s telling that learned articles on the subject appear in journals like Quarterly Publications of the American Statistical Association and American Mathematical Monthly: this is a problem that requires scrutiny by professional mathematicians. But no amount of arithmetical ingenuity can ever solve it once and for all. In 1982, two mathematicians proved that every system of apportionment necessarily falls prey to some paradox.

Since Washington vetoed the first apportionment bill in 1792, the population of the United States has multiplied nearly a hundredfold, and has more than tripled since the size of the House was set at 435. There’s no longer any danger of having a representative for fewer than 30,000 residents; in the current apportionment, based on the census of 2000, each House member represents more than twenty times the lower limit specified by the Constitution.

Critics have argued that the size of the House should be increased: as the number of representatives grows larger and the districts grow smaller, the districts become less susceptible to gerrymandering, the disparities in the Electoral College become less pronounced, and the difficulties of rounding apportioned seats become less acute. It’s less painful to round 100.9 down to 100 than it is to round 1.9 down to 1. But such proposals have attracted little support, and it may be impossible to return to the kinds of numbers conceived by the founders. Now that the country’s population has passed 300 million, allotting one representative to every thirty thousand people after the census of 2010 would mean a House of more than ten thousand representatives. It’s hard to imagine how a government of that size could function, to say nothing of finding a building large enough to seat them.

It may be unusual for articles on Constitutional questions to begin, as Michael Balinski and H. Peyton Young’s “Jefferson Method of Apportionment” does, with “Let p = (p1, . . . ps) be the populations of s states, pi > 0 for all i, and h ≥ 0 be the number of seats. . . .” But this is a case where fundamental questions of justice require the consultation of experts, and where a sense of fairness depends on elaborate calculations.

Yet the mathematicians will never be able to solve the matter to everyone’s satisfaction, which means the constitutional question is destined to last. No system can guarantee the “one proportion or divisor” that Washington wanted: some votes will always count more than others. It’s inescapable. As United States Senator from Massachusetts Daniel Webster put it in 1830, “Enjoining an absolute relative equality”—that is, making every vote count for the same amount—“would be demanding an impossibility.” He summarizes two centuries’ efforts to distribute voting power equitably: “That which cannot be done perfectly, must be done in a manner as near perfection as can be. If exactness cannot, from the nature of things, be attained, then the greatest practicable approach to exactness ought to be made.” 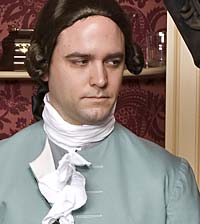 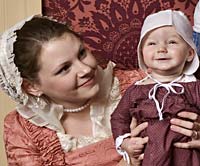 Ellen Knecht and Eomer Knecht interpret the colonial woman and child's role in the census. 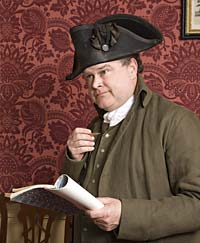 Steve Holloway stands as census-taker in this parlor scene. 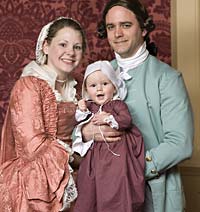 The 18th-century family had much to gain from their patriarch's vote. 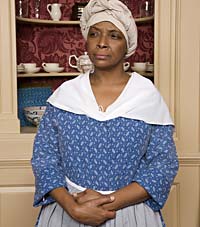 Sylvia Tabb plays the part of an African-American citizen of the colonies.

Jack Lynch, author of Becoming Shakespeare: The Unlikely Afterlife That Turned a Provincial Playwright into the Bard (Walker & Co., 2007) is associate professor of English at Rutgers University. He contributed to the spring 2009 journal “A Principal Source of Dishonor: Indian Policies in Early America.”