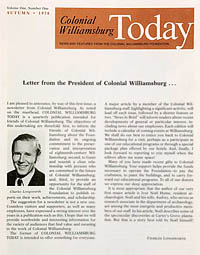 1978’s inaugural edition led with a word from the Foundation president, beginning a tradition still observed in today’s issues.

In the mid-1970s, when Roger Thaler was hired as Colonial Williamsburg’s first vice president of development, he suggested that the foundation needed a regular publication that spoke to donors’ interest in eighteenth-century history, in Williamsburg and farther afield.

People had long asked for such a publication, Charles Longsworth, then president of Colonial Williamsburg, said in the first issue, and Thaler decided that the time was right. To serve as editor, he enlisted Tom Schlesinger, a veteran journalist and brother of the historian Arthur Schlesinger Jr., though then, as now, many hands made each issue possible, from writers to photographers to curators, archivists, and office staff.

The journal remained a twelve-page, black-and-white publication until 1983, when the economic summit of the then G7 met in Williamsburg, attended by President Ronald Reagan, Prime Minister Margaret Thatcher, and other leaders, and a longer, full-color issue was published to introduce Colonial Williamsburg to the delegates and to those in the wider world who may have been unfamiliar with the institution, a format and size that became the permanent look of the journal.

The magazine has covered colonial history and Colonial Williamsburg in detail and depth, from the making of nails in the Historic Trades forge to the making of a nation in the House of Burgesses, occasionally turning back to precolonial times and forward to the twenty-first century, as well as outward to Europe and the rest of the world. The fixtures highlight events around the foundation, from recent art acquisitions to Historic Area programs, and include regular items such as the president’s message and Wit, Mirth, and Spleen.

Contributors have ranged from Colonial Williamsburg experts to professors of history, art, and archaeology. Having written for the majority of issues in the past thirty years on the discoveries of archaeology and colonial history from Canada to Bermuda and beyond, retired head of archaeology Ivor Noël Hume will again appear in the next issue. Retired vice president of collections Graham Hood continues to write articles that explore the fine and folk arts of the colonial era.

Winner of two Emmy Awards for television documentary writing and professor of English at the University of Maryland, Michael Olmert has covered the more modest structures of Williamsburg life, from kitchens to dovecotes. More recently, James Axtell, professor of history at the College of William and Mary, and Anthony Aveni, professor of astronomy, anthropology and Native American Studies at Colgate, have supplied pieces for the magazine. In time for the four-hundredth anniversary of the establishment of Jamestown, the foundation published a collection of magazine articles that had appeared through the years, 1607: Jamestown and the New World.

During the three decades of the journal’s existence, the magazine has had three editors—Tom Schlesinger and Wayne Barrett were the first two—and a small number of full-time staff: Sondra Rose, Brenda DePaula, and Su Carter, in addition to the current staff. The masthead shows how many others in the foundation are essential to putting the magazine together.