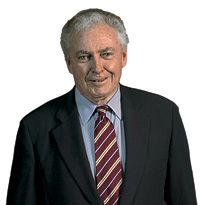 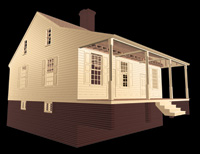 At the historic area’s east end, down by the Capitol, The Colonial Williamsburg Foundation is reconstructing the first eighteenth-century structure on Duke of Gloucester Street in fifty years. Charlton’s Coffeehouse, once a retreat for the city’s leading politicians, lawyers, and merchants, is rising again on its 1750 foundations, and by the end of 2009 will be catering to twenty-first-century guests who’ve come to participate in Revolutionary City, tour the Historic Area, see an evening program, or enjoy a colonial tavern.

A story-and-a-half tall and thirty-five-feet square, Charlton’s will be a remarkable place, with some marvelous features. Take, for example, its single, central chimney, which, rising from a basement kitchen, will carry seven fireplaces. Within, guests will find the fine furniture, patterned carpets, and even wallpapers suggested by new research on such gentry establishments. An abundance of prints, maps, and “current” newspapers will connote the atmosphere of edification and conversation that coffeehouses were known to engender among their well-informed clientele.

Then there is the porch, which runs along the front, from one end of the building to the other. In colonial days, proprietor Richard Charlton welcomed gentlemen to take their leisure there, and in 1765, the year of the Stamp Act, it was the final scene of a memorable event.

The Stamp Act, you’ll recall, was a revenue measure, Great Britain’s first attempt to impose an internal tax on its American colonies. The law required merchants, lawyers, printers, and others to transact business with stamped paper purchased from agents of the crown. Patrick Henry had risen in the House of Burgesses that May to introduce resolutions against the measure, resolves that inflamed America against the mother country.

George Mercer came from England in October carrying a supply of the hated paper to sell. On word of his arrival, an angry crowd pursued him down to Charlton’s, where Governor Francis Fauquier, relaxing on that porch, rescued him. The next day, Mercer announced he would not be selling his paper in Williamsburg after all. None ever was. I can just picture opening the new Charlton Coffeehouse with that tableau. In addition, the porch will be an excellent stage for Revolutionary City scenes. And yet it fits. It is an exact reconstruction, really an authentic setting, and a wonderful space.

The coffeehouse is being brought back to life through the generosity of two remarkable people, Forrest E. Mars Jr., the retired chief executive of Mars Incorporated, and his spouse, Deborah, of Big Horn, Wyoming. Life members of our Raleigh Tavern Society, and foundation supporters since 1984, the Marses have given $5 million for this project.

They deserve the applause and gratitude of everyone who loves this old city. Their names are in the most recent group of additions to the Visitor Center’s Courtyard of Philanthropy, recognizing those whose extraordinary generosity makes it possible for Colonial Williamsburg to carry out its ambitious programs.

Since about 1890, the Charlton lot had been the site of the Cary Peyton Armistead House, a beautiful, graceful Victorian home. In 1995, the Armistead family cooperated with the foundation in acquisition of the building and rights to purchase the land. We moved the house, protected the site with a roof, and began archaeological, architectural, and historical investigations. The results of this painstaking work are now being translated into wood, brick, and mortar.

The project got started after Deborah Mars visited in 2003 and saw chocolate making in our foodways programs. She and her husband soon founded the Colonial Chocolate Society, an organization of people interested in chocolate as an important food in the colonial era. The groups include Mars Incorporated, the University of California–Davis, and several living history museums. The society oversaw the development of the Mars American Heritage line of chocolate products now sold at such historic sites as Mount Vernon, Monticello, Fort Ticonderoga, Fort Louisburg, and Colonial Williamsburg.

Forrest Mars was intrigued by the role of chocolate in colonial times. It was used as rations for the troops, and it was available to eat and drink in taverns. We talked about that, he was aware of the importance of Charlton’s Coffeehouse, and of our desire to reconstruct it, and he decided that he would like to make that happen. And quickly, too. The reconstruction is a collaboration of our own research staff, curators, Historic Trades people, and outside builders. It is a complex undertaking, too. Creating a 1750s building in 2008 requires wiring, air conditioning, and the like, and attention to modern building codes.

Charlton’s will be primarily an exhibition building, where we can bring to life this very important political and commercial hub of the town’s life and where we will offer ticketed guests pastries, tea, coffee—and, of course, chocolate. I’m very excited about the construction process—which will delight our guests—and, for the first time in the twenty-first century, about once again reconstructing an eighteenth-century establishment.

In 1934, when President Franklin Roosevelt dedicated Duke of Gloucester Street, Colonial Williamsburg was declared substantially complete. Yet, more than seven decades later, we’re still recovering pieces of a city in an endeavor dedicated to the idea that the future may learn from the past. In fact, Colonial Williamsburg will never be complete, but the reconstruction of Charlton’s Coffeehouse is a tremendous stride forward.