CW Journal : Autumn 2006 : The Art and Mystery of the Apothecary

The Art and Mystery of the Apothecary 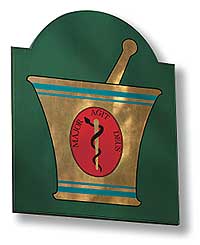 Step into Colonial Williamsburg's Pasteur & Galt Apothecary and the first thing you may notice is the aromatic blend of spices and other products on the shelves. The collection of antique delft drug jars along one wall may catch your eye, or the dialogue may catch your ear. What was the interpreter behind the counter asking?

"What causes a fever? Here is a hint. In the eighteenth-century; the word 'germ' was defined as a plant bud, so...One theory was that the elevated pulse associated with most fevers was caused by the heart pumping the blood too fast through the vessels, this in turn caused friction and heat."

Welcome to the world of eighteenth-century medicine, where one hears familiar words, sometimes with unfamiliar definitions. It's a time when medicine was based on empirical observations and reason. The sciences of biology and chemistry had not made significant impacts on the theories of disease. Diseases were classified by their symptoms, not their causes. The big health issues of the day were not heart disease, cancer, obesity, or diabetes; they were smallpox, malaria, and childhood illnesses. 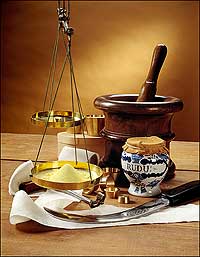 Weights and scales, mortar and pestle, jars and surgical instruments—the tools of the apothecary's trade.

In drawers and in bottles and jars lining the shelves of the apothecary shop are liniments, potions, and pills.

Doctors William Pasteur and John Minson Galt, who practiced in Williamsburg in the eighteenth century, apprenticed for part of their education and trained at St. Thomas's Hospital in London. Galt also went to a private London school to study midwifery and attended lectures on the theory of medicine.

In some trades, skills and knowledge were secret, and little about them was published. For the apothecaries' and surgeons' trades, there were textbooks, and many survive. The National Library of Medicine, the nation's largest medical library, published a bibliography of the eighteenth-century books in its collection. Most of the 501 pages are titles on such matters as medical theory, midwifery, pharmacy, surgery, and diseases.

Medical history embraces such social history as the stories of doctors and their patients, as well as clinical medical practice, which includes the use of tools and drugs and the theories of treatment. Though the Pasteur & Galt Apothecary staff tries to keep up with secondary sources, much of the interpretive and program information is from primary documents. Each interpreter has spent more than twenty years studying eighteenth-century medicine, and specializes in aspects of its practice.

The staff has collaborated on such projects as a book, Physick: The Professional Practice of Medicine in Williamsburg, and making reproduction medicines based on period pharmacy books. Each has done interpretive programs at the shop and lectures at conferences.

Among the challenges in interpreting medical history is relevance. How to bridge the gap between the technology and business issues of an eighteenth-century trade with the modern interests of guests? One way is to provide perspective on themes that transcend time. Such contemporary issues as the quality of drugs marketed and affordability of health care are old topics.

Colonial pharmacy and chemistry books warned practitioners about drugs that had been adulterated for profit. In addition to purity, quality could be a concern. Pasteur once wrote to his London supplier to say that when he wanted second-quality drugs, he would let it know. As for affordability, Virginia lawmakers discussed the cost of health care and passed a law to regulate prices in the 1730s.

Another challenge is working with a room full of guests with a range of ages and interests. A teen becomes interested when he or she compares sports injuries experiences with eighteenth-century treatment. The sight of a tooth key for pulling teeth and a discussion on the details of using it catches the attention of a group of grammar school students. A modern practitioner picks up a reproduction tool or medicine and examines it in light of his or her training.

For modern health-care professionals and students, the opportunity to see the shop provides perspective. For guests who relate from a patient's point of view, there is the opportunity to step back in time. Imagine an era where surgical tools are beautifully handcrafted and surgical texts use the word "clean" instead of "sterile."

Drug jars are decorated with cherubs, birds, and baskets of fruit, but few of the contents can cure or prevent disease. Everyone can appreciate the advances in medicine—eighteenth-century doctors wrote with pride that the science had made progress since the ancient and medieval eras.