Tailor Made for History 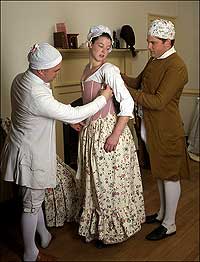 Most colonial Americans bought their clothes. Few lived so self-sufficient an existence that they wove cloth, carved buttons, and stitched together fabric in front of the fireplace. Almost everybody in eighteenth-century Virginia from slaves to merchants to royal governors required a tailor.

Mark Hutter, who with apprentice Neal Hurst interprets tailoring for Colonial Williamsburg, said, "In any urban environment—Williamsburg, London, Philadelphia, New York—tailors were the largest trade in terms of practitioners. Everyone needed clothing." Demand for clothing was so strong that cloth was America's largest import before the Revolution.

Hutter and Hurst have been working in the millinery shop on Duke of Gloucester Street. By the end of 2006, they are to move to the east end of the Peyton Randolph House, which colonial tailor Stephen Buck occupied. The shop is to be furnished based on his inventory.

Guests find the tailors at their table before a large front window where there is light for cutting and sewing. They welcome guests, share knowledge, and, occasionally, measure folks for waistcoats as if they were clients from the 1700s.

As a boy, Hutter worked in a living history program near Corning, New York. Determined to offer the most convincing presentation of the past, he decided to make his own clothes for the job. A slight interest grew into an abiding absorption.

As a teenager, Hurst reproduced nineteenth-century clothes, and began working in museums as a volunteer archivist in Pennsylvania.

In the eighteenth century, men dominated the tailor's trade. But they made garments for men and women. As with other crafts, would-be tailors served an apprenticeship. They often began training at age eight.

"Apprenticeships lasted seven years," Hutter said. "There was much to learn. A long apprenticeship also discouraged the half-hearted. In England, it also reflected the power of the tailors' guild, the oldest and strongest guild in the country."

Hurst said, "The eighteenth-century apprentice was expected to sew and read and write, as I am, but he didn't do scholarly research and talk to guests."

"Sewing was not the defining skill of the trade," Hutter said. "It was a basic skill, like driving a nail for a carpenter. In fact, the trade had some practitioners who were called 'table monkeys.' All they did was sew."

The trade had a hierarchy. "Table monkeys" occupied the lowest level. The most admired people were cutters and finishers. Cutters cut patterns. Their abilities determined how well clothing fit a customer's body. "Fit" in tailoring was—and is—everything. Finishers did work that was often delicate and detailed. It might include buttonholes or fashionable trim. 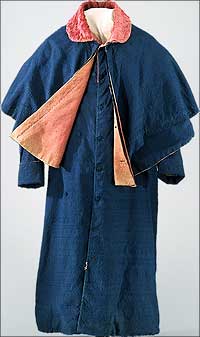 This handmade, circa 1780-–1820 greatcoat examples the skills of the tailor.

All tailors in the 1700s worked by hand. So everybody at all levels of society had handmade clothes. This did not mean, however, that garments were uniformly expensive. They varied in price, style, quality, and material, which included silk, cotton, and wool.

By the 1700s, the clothing industry in Great Britain was specialized. There were dozens of trades focused on the production of particular items of apparel. There were craftsmen for shirts, for gloves, for stockings, for hats, and so on.

English tailors made clothes that generally fit the body closely. They produced men's garments that included: greatcoats; cloaks; robes, including loose fitting "banyans" and wrapping gowns, derived from Japanese kimonos; and "sherryvalleys," which were worn on the legs over breeches to protect clothing. For women, tailors made riding habits, stays, hoops, and cloaks. Generally, tailors did not make shirts. Seamstresses did. Tailors did not make women's gowns. Mantua makers produced them.

American tailors tended to be generalists, not specialists. William Carlin of Alexandria, who enjoyed a reputation as an excellent businessman, is a good example. His shop supplied clothes for everybody. He provided clothes for slaves, including linen jackets and trousers for field hands and fine suits for household servants. Carlin also attended to the needs of those at the top of society. His firm altered Martha Washington's stays and made silk suits for Colonel Fairfax and mourning suits for George Mason and his sons.

Members of Virginia's societal elite knew that clothes made the man and the woman. Or, in the words of a tailor of the time: "No man is ignorant that a taylor makes our cloaths; to some he not only makes their dress, but in some measure, may be said to make themselves."

The best-dressed Virginians were aware of fashion trends abroad. London magazines arrived in the colonies filled with descriptions of the latest styles. Ladies' wear got a lot of ink. Wise colonial tailors stayed abreast of developments overseas and supplied what customers wanted. 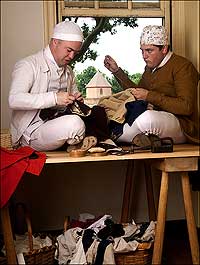 Hutter and Hurst at table in new Nicholson Street shop

Some of Virginia's leaders wanted attire that made statements about their roles in society and government. George Washington was conscious of his image throughout his life. As a young man, he wanted to present himself as an English gentleman. He used London tailors. From them, he bought conservative yet elegant clothes made from high quality, simple fabrics. As president, he switched his allegiance to American tailors and textiles. To flatter national sensibilities, Thomas Jefferson dressed carefully in the best French fashion while serving as ambassador to France. Patrick Henry, who drew his support from common people, dressed "down" most of the time to ensure a link with his constituency. Henry, however, also understood the way the world really worked and dressed "up" when attending social events with the colony's elite.

Between the needs of the privileged and the lowly, tailors could find plenty of work. But success was never assured. George Bosomworth was a Williamsburg tailor who barely made a living. At his death in 1773, his estate was worth £24. He placed no advertisements, and historians know nothing about his customers, or goods.

But fortune might smile on a hardworking and talented tailor like Williamsburg's Thomas Hornsby. When he died in 1772, his estate amounted to £12,174. Hornsby not only employed tailors and sold clothes, but he also sold general merchandise.

To succeed, Hutter said, a tailor had to have skill, business sense, a knowledge of accounting, and sometimes a familiarity with French to follow trends and terms from continental Europe. The aspiring businessman also required a polished manner, an ability to put clients at ease, and a certain sense of discretion given the intimate nature of his work.

Hutter and Hurst have a style that is easy but not too familiar. They enjoy sharing all they know. Hutter said that he likes the puzzle-solving, engineering-like quality of putting together an article of wear. And he seems to enjoy the fine detail work, and the concentration and ability it demands.

Ed Crews contributed to the summer 2005 journal an article on masonry trades at Colonial Williamsburg.