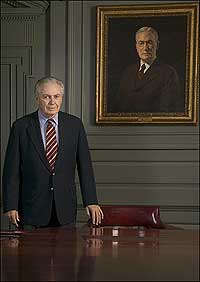 A reverence for America's past inspired the restoration of eighteenth-century Williamsburg. So did a belief in the nation's future. Preservation is as much about times to come as it is about times that have been. That idea was fundamental to the return of the colonial Virginia capital to its 1770s character. More than seventy-five years later, it remains central to the enterprise.

"That the future may learn from the past" is the motto philanthropist John D. Rockefeller Jr. gave to Colonial Williamsburg as he and the Reverend Dr. W. A. R. Goodwin collaborated to preserve not just a set of places but a set of principles—equality, liberty, justice. Principles that such men as Washington and Jefferson, Henry and Mason, helped to define and advance when they walked old Williamsburg's streets.

Then, as now, they are precepts of an American creed, ideas still indispensable to the republic, surely as necessary today as they have ever been. They are the vocabulary of a common language, items on the general agenda of freedom. Much like the agenda drafted in eighteenth-century Williamsburg. The contemporary relevance is clear. In this era of expanding diversity, exponential change, and accumulating challenge, it is manifest that to the extent we keep faith in first principles, we shall remain united in a single society.

But, as Mason emphasized, "frequent recurrence to fundamental principles" is essential to sustain that society. Where are those principles to be revisited? Schools are challenged to give them the attention they deserve. Immigrants and first-generation Americans do not always have the opportunity to be well-enough grounded in the bedrock of our beliefs to permit them to participate fully in representative democracy. Who will teach them? How can we, working together today, give America's first principles meaning for tomorrow?

As I consider the future, I am persuaded we should find ways at Colonial Williamsburg to broaden and deepen our role in educating young and new Americans in participatory citizenship. I believe we should be more purposeful in conveying the idea of America. We should be a more binding ingredient in the glue that keeps our nation together.

We must find better, more contemporary means to present a clear and universal connection between what has happened and what will happen to America, of how the past will influence the future. We cannot rely on the subtlety of our message to assure that people who participate in Colonial Williamsburg's programs will perceive their experience as not only a lesson in history but a seminar in citizenship. A connection between the aspirations of the Revolution and the success of the American Experiment. I do not suggest that we give less attention to the past; I urge, though, that we give more attention to the future.

What does this mean in practical terms? A Web site that provides guests, before they arrive, with a deeper understanding of the journey that awaits them and of what that journey can mean to one's potential as a citizen. An orientation experience that better propounds that important message. An expanded introductory tour program that will reinforce it. More comprehensive opportunities for training in citizenship education for Historic Area staff. Electronic field trips for secondary school students, in addition to the current program for elementary and middle schools, and other outreach efforts that will focus on citizenship responsibilities.

The celebrated figures who peopled Williamsburg's past resolved to help fashion the future for the better. Sustaining their legacy for generations to come, furthering the idea of America, for all people, for all time, must be our unshakeable commitment.