CW Journal : Autumn 02 : The Miller and the Windmill

The Miller and the Windmill 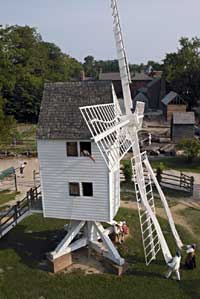 Mill hands, in the persons of Colonial Williamsburg interpreters and tradespeople, unfurl the sails over the vanes of the towering wind-powered machine at the rear of the Peyton Randolph House.

On a cool sunny day in a steady breeze, Robertson’s Windmill swings to life. Its huge arms twirl and its giant gears thump and its millstones spin. Mammoth and simple, the mill is a powerful creation made mostly of wood—like a giant’s plaything constructed from an enormous Tinker Toy set.

It’s a colossal low-tech machine that proudly displays all its outsize parts. Modern technology is not so brazen. Today’s designers cover the mechanisms of their machines in metal and their computers in hard plastic. A windmill reveals all at a glance. Ed Schultz, the supervisor of Colonial Williamsburg’s rural trades, says a windmill reduced to its basics is just two big grooved disks of rock, grinding grain between them. Any visitor can look inside, study its cogs and shafts and in minutes understand its operation.

Robertson’s Windmill is also a show. Grain crackles as it feeds onto the millstones. The massive wind shaft whirrs as it carries the power of the rotating arms into the mill. Stones whoosh softly. Sails pop. White corn dust fills the air. Watching visitors as they watch the mill is entertaining. They always seem captivated by the sifter. Often, they tap their feet in time to its steady, pounding rhythm.

Nobody at Colonial Williamsburg knows better than Neal Black the sights, sounds, smells, and delights of a windmill. For more than thirty years, he ran Robertson’s Windmill, mastered it, maintained it, cleaned it. But the time came for him to retire in late spring 2002. He visits, however, and is on call to answer questions and help with technical problems.

Windmills were operating in Western Europe by the late 1100s. During the ensuing centuries, they were common in Spain, Holland, and parts of England. In their heyday, windmills turned out flour, pumped water, and spun electrical generators—which they are doing again.

On the eve of the Industrial Revolution, inventors refined mill technology, improving sail mechanisms in the late eighteenth and early nineteenth centuries. Windmills began to fade with the development of steam power in the 1800s and went into rapid retreat in the twentieth century with the perfection of the internal combustion engine and electrical motors.

The first English settlers in North America were aware of windmills and their laborsaving benefits. But no one built one in the first colony, Virginia, for fourteen years. That was in 1621, when Governor George Yeardley erected a windmill on his James River plantation, Flowerdieu Hundred, where a replica stands today. The Massachusetts settlers constructed their first windmill in 1631. 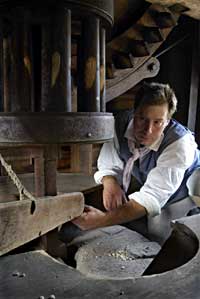 Interpreter Edward Schultz at the gears, hopper, and millstone.

Virginia has excellent sites for wind-powered mills. Points of land jutting into Chesapeake Bay and into the broad waters of such rivers as the James and Potomac provide clear-air spots ideal for windmills.

The early Virginia mills tended to be on plantations. Generally small, they served the planter and his neighbors. During the late 1600s, however, mills began to flourish in the Old Dominion. Mill construction and operation boomed in the next century as Virginians began growing wheat and exporting flour. Some operations were sizeable. For example, Robert Carter completed a mill in 1773 with an annual production capacity of 25,000 bushels. 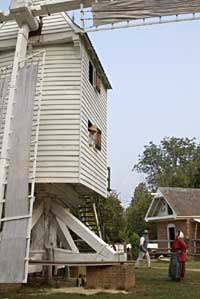 David Nielsen leans out to chat with Terry Thon as Schultz strolls past. Note Emily, the Robertson Windmill mascot, beneath the cross member.

Comparatively little is known about the Williamsburg-area windmills. Researchers know that during the first quarter of the century the town had a windmill owned by William Robertson, a lawyer prominent in civic life.

Historians believe Robertson’s Windmill was at the corner of North England and Scotland Streets. He deeded it to John Holloway in 1723.

Scholars are confident that Robertson’s was a post mill—one of the two prevalent types of North American windmills. Post mills had a house-like structure that bore the machinery and sails. It stood on a solidly anchored post of large timbers. Balanced on the post, the house could be positioned to point the arms into the wind. Millers moved it by pushing a tail pole, which ran from the mill to the ground and often rode on a wheel.

Then there was the tower mill. Tower mills had fixed bases that contained their grinding stones and gears. The upper level, where the sails flew, was moveable.

Odds are good that Robertson hired a millwright to build his structure, Schultz said. In the 1700s, mill construction took the knowledge and the skills of a carpenter and housewright as well as a grasp of rudimentary engineering. The millwright had to understand a mill’s operation, the relationships of its components, and the strength and balance a mill took to withstand the stresses of the wind, weather, and its own machinery.

It is a logical conclusion that Robertson chose to run his business as a custom mill, Black said. It ground grain as a service, charging by the bushels of grain processed. A legislative act in 1705 set the grinding fee at one-sixth of the corn or one-eighth of the wheat. Larger mills tended to operate as merchant mills. These ventures bought grain, processed it, and sold the flour, often for export. 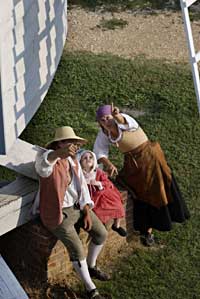 Nielsen and rural tradesperson Ramona Vogel point out to costumed little Molly Carr, the daughter of interpreter Lyndon Howlett, how the vanes spin.

Robertson probably never considered running the windmill himself, Schultz said. He had his legal career, his civic duties, and his place in society. Moreover, eighteenth-century mill operation was not for amateurs.

Modern Americans might assume a miller required little training or skill. But, Schultz said, a windmill was a powerful, demanding, unforgiving, and difficult-to-control machine. A miller had three ways to adjust its operation. He could set the sails to conform to weather conditions. He spread canvas in light winds and reduced it when wind speed rose. He could regulate the flow of grain to the millstones. And he could adjust the distance between the stones. 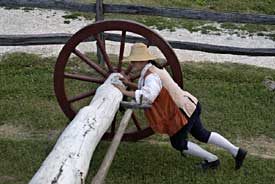 Nielsen demonstrates how the windmill’s wheeled tail pole is used to turn the sails into the breeze. The smaller pole raises and lowers the first-floor stairs.

No gauges, dials, or computer screens told the miller how to get the optimum mix of adjustments. He had to develop a sixth sense about the machinery, Black said. That sense came only with years of experience and a full appreciation of the interplay of dozens of factors.

Weather always presented the miller his greatest challenges because he relied on it but couldn’t control it, Black said. The weather determined when and how hard a miller worked as well as his productivity. “You have to know how to deal with the elements—wind and rain,” Black said. “You have to be able to look at the clouds and see what sort of weather was coming.”

Without modern controls, the miller also had to rely on his senses with the machinery. If he perceived slight changes in movement, sound, or smell, he could adjust, shift, and anticipate, squeezing a little more performance out of one area and, perhaps, averting a crisis somewhere else. Anything could signal a problem. A sound might change or stop. A rhythm might shift. 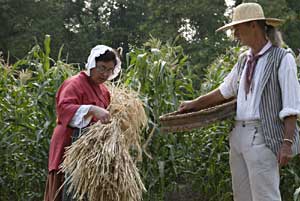 Thon and Wayne Randolph examine a shock of wheat ready for threshing.

Nothing, however, got a miller’s attention faster than the “hot” smell of millstones rubbing. “It’s a distinctive smell,” Schultz said. “It’s like a great, big exclamation point.” At the end of the word “trouble.”

As an overseer, the miller had to ensure his workers were alert and busy and pitched in periodically to keep the process going. If time allowed, the miller instructed his apprentice, who did most of the heavy lifting. On the basis of his experience, Black said that a miller couldn’t relax. Everything in the windmill seems to demand his full attention. 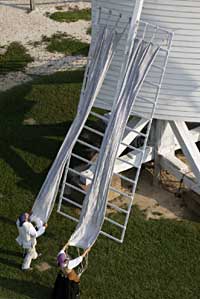 For masters of this machine, a windmill’s output could be impressive. Black perfected a system that worked best with three men, including himself. Under optimum conditions, a steady wind and a lively team, Black could produce 180–200 pounds of cornmeal an hour.

Major repairs required a millwright. Most millers, however, probably could stitch a sail or fix a slight gear problem, Black said. A miller also might “dress” millstones, keeping the furrows in the face of the disks deep and the lands rough.

Millers typically had to know bookkeeping and had to have skills for getting along with customers and the mill owner. They also had to know if grain was spoiled and whether it was ground finely enough.

Ed Crews contributed to the summer 2002 journal “How Much Is That in Today’s Money,” a story about determining the modern value of colonial currency.